As the Ad Hoc committee set up by the House of Representatives to probe the Edo State House of crisis commenced it’s investigation, the exiled lawmakers have reveled that the Executive arm of the state became a threat to their lives, hence the need to flee.

The 15 members of the Edo House of Assembly who were not inaugurated were at the National Assembly gave insight into what transpired in the state.

Narrating to the Abdulrasak headed committee how they were shut out of the inauguration by the Governor of Edo State, Godwin Obaseki, Hon Washington Osifo, said the inauguration performed at the Edo House of Assembly on 17th of June was illegal.

Also Speaking, Christopher Okibe labelled the inauguration of the 6th Edo House as a legislative embarrassmen, because according to him, they were “appendage of the Executive.”

He further revealed that the governor offered them money to vote against their legislative autonomy. In his words, “They even forced us to vote against our own autonomy, N5 million was given to each member who agreed to be inaugurated,”

The members recounted their experience at the Golden Tulip Hotel and how they were brutalised by thugs allegedly on the order of the Governor.

The state assembly lawmakers came with evidence in 15 flash drives, documents including screenshots of text messages from the Governor, pictures, audio and video recordings for the perusal of the committee.

They said because of the threat to their lives, they have exiled themselves to the federal Capital City.

Recall that the House of Representatives on Tuesday resolved to set up a fact-finding committee to investigate the crisis in the Edo State House of Assembly.

But the investigation is with a view to reconciling the warring factions.

The ad hoc committee is given a week to report back to the House.

While speaking, the Chairman of the ad hoc committee, Abdulrasak Namdas said though the House of Representatives has the constitutional powers to take over the functions of the Edo House of Assembly, members feel there is need to seek the genesis of the problem and look at the possibility of reconciling the two factions.

The panel will be visiting Edo State within the week and will take testimony from the Governor, as well as the Commissioner for Police amongst others and visit the Oba of Benin. 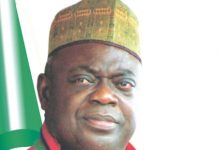