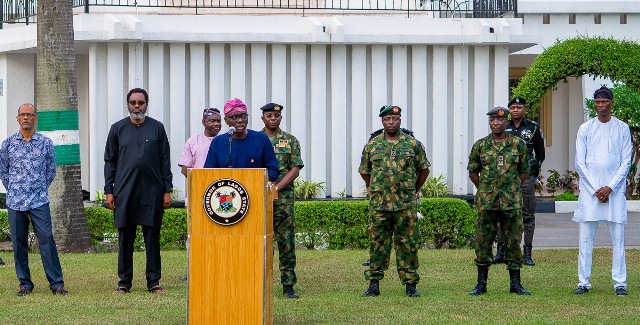 •Governor declares war on criminals
Lagos State Government has announced the launch of palliative measures to ease the economic impact of the lockdown on residents of the state.

This comes less than 24 hours after President Muhammadu Buhari, in a nationwide broadcast on Monday night, extended the cessation of movement in Lagos, Ogun State and the Federal Capital Territory (FCT).

Sanwo-Olu announced the social intervention programmes during a briefing that followed Security Council meeting held at the State House in Marina, on Tuesday.

He said: “Before the first set of stay-at-home directives, I announced a welfare package for the indigent and vulnerable segment of the society. Though we encountered some hitches along the way, we have since revised the process and have now seen a mark of improvement in the distribution of the relief packages that is being carried out in a dignifying manner and in full compliance with all public health directives and guidelines.

“Today, I am pleased to announce additional palliatives for our citizens to further ameliorate the inconvenience occasioned by this extended lockdown. In the next couple of days, we will commence a daily ‘Food Kitchen’ programme with the target to feed about 100,000 people daily.

This will largely target the youths.

“We are also cleaning up our data from our various social registers to get a clean list of truly vulnerable and economically challenged persons to enable us remit some cash to them. We aim to do these cash transfers by the end of the week to a minimum of 250,000 indigent citizens.

All the MSMEs and SMEs that took LSETF loans and got supports from other Government’s financial incentive programme will enjoy a three months moratorium. With immediate effect, I have ordered the police, LASTMA and the VIO to release all impounded vehicles arrested for minor traffic offences from the 1st of March. All these palliative measures, we believe, will further help to cushion the effect of the lack of economic activities in the State occasioned by the lockdown.”

Meanwhile, Sanwo-Olu declared war on criminals taking the advantage of the lockdown to engage in armed robbery and cause unrest in boundary communities, directing the security operatives not to spare anyone caught.

The Governor disclosed that over 100 miscreants have been apprehended by the police on account of disturbances, adding that the Inspector General Police (IGP) had already deployed a Deputy Inspector General (DIG) from Abuja to lead a special force to burst criminal gangs breaching the peace in the affected communities.

Why we directed schools to remain shut – NCDC

Must read! US priest who shook hands with more than 500 worshippers infected with...