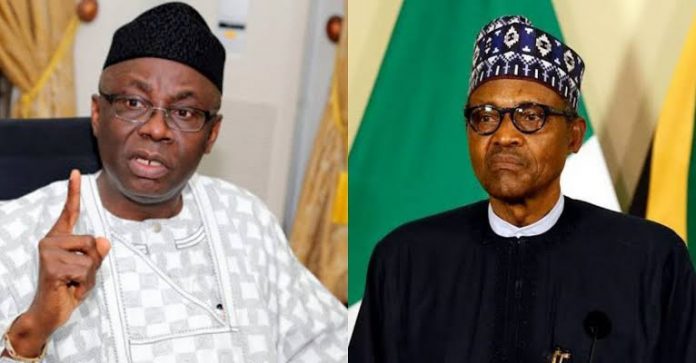 He berated the president for treating the symptoms of the country’s foundational problems rather than the causes.

He warned that Nigeria was being dangerously pulled apart because the government had engaged in honest, but cosmetic efforts to solve its two fundamental problems of nationhood and statehood.

Bakare, who was Buhari’s running mate during the 2011 presidential election, reflected on National Security in a statement titled “The Conspicuous Handwriting on the Wall,” during his church’s Easter Sunday service.

The cleric recalled that in his first term in office, the President “summed up his election campaign promises in three pivotal agendas, namely: security, anti-corruption and economic diversification with a focus on job creation,” which provided an opportunity for the administration to address the country’s “fundamental” and “foundational” issues.

Bakare said: “However, the first term saw the Buhari administration grapple with the collapse in oil prices and Nigeria’s first recession in about twenty-five years. But, despite the false starts, the administration succeeded in bringing Nigeria out of recession and made some gains in security, anti-corruption and job creation….

“However, laudable as these achievements are, the current state of the nation is a clear indication that these efforts have been insufficient in dealing with our national problems; they have been unable to address the underlying problems of the Nigerian nation. At best, these efforts bought the administration some time to stabilise the nation’s condition from a volatile state, as pain relievers can help stabilise a patient in critical condition so that the underlying condition can be treated.

“The major limitation of the administration of President Muhammadu Buhari has been the failure to appreciate the fact that the problems of Nigeria are more deeply rooted than these honest efforts can reach, and that what is required is a holistic and systematic approach to governance.”