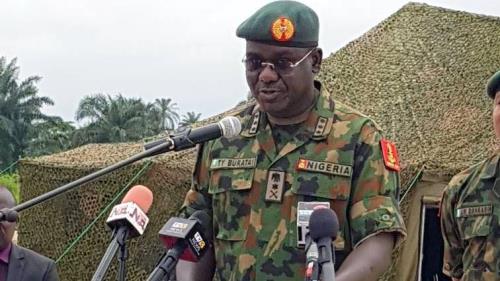 Chief of Army Staff, Lt. Gen. Tukur Yusuf Buratai, yesterday vowed that violent crimes in the Niger Delta demanding military intervention would be squarely dealt with, restating the commitment of the military to flush out criminal elements in the region.

Speaking at the commissioning of the headquarters of the 63 Brigade Complex and the official operationalization of the brigade in Asaba, Buratai said the success of Operation Crocodile Small IV was an indication that the military was battle ready for criminal elements in the region.

Saying that the state was very critical in view of its strategic importance to the South-South and open direct access to seas, he commended the Delta State Government for providing logistics for the brigade.

Speaking further, Buratai also thanked the State Government for providing an expanse of land along the Benin-Asaba-Onitsha highway for the brigade and its battalions.

While inaugurating the complex, Governor Ifeanyi Okowa told security agencies to step up efforts at tackling security challenges especially the farmers/herders clashes which recently assumed worrisome dimension in the state.

Okowa assured the Army of his administration resolve to continue to support security agencies despite the low finances of the State.

Meet woman 32, born a premature baby now grown to be a specialist doctor