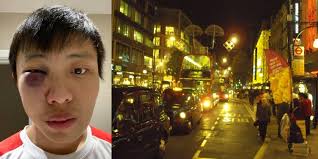 A young man who was beaten up in a racist attack on one of London’s busiest streets has said he was targeted because of coronavirus.

Jonathan Mok, a 23-year-old student from Singapore, said he was attacked at around 9.15pm on 24 February on Oxford Street.

In a Facebook post, Mr Mok said a man, who was with three or four other men and one woman, said something about “coronavirus” before punching him in the face.

He said another member of the group then said: “I don’t want your coronavirus in my country,” before hitting him on the nose and causing blood to splatter on the pavement. The group then ran off before the police arrived.

Following the attack, the victim was taken to hospital, where he was told that he had suffered several fractures to his face. Doctors also told him that he might need to undergo reconstructive surgery.

One photograph posted by the victim on Facebook shows him with a black eye and a bloodied face immediately after the assault. Another photograph taken the next day reveals the extent of the swelling around his eye.

A spokesperson for the Met Police told The Independent: “Police are investigating a racially aggravated assault in Oxford Street near Tottenham Court Road station at around 2115hrs on Monday, 24 February. The victim – a 23-year-old man – was punched and sustained facial injuries.”

Police said there had been no arrests so far but that they were working to identify the suspects.

Mr Mok, who has lived in London for two years and studying at UCL, wrote in his Facebook post: “Racism is not stupidity – racism is hate. Racists constantly find excuses to expound their hatred – and in this current backdrop of the coronavirus, they’ve found yet another excuse.”

This attack comes amid a spate of reports of racism against Asian people following the outbreak of coronavirus, which was first identified in Wuhan, China, in December last year.

#EaseLockdown: Civil Servants to Work From Home, others in new Lagos guideline