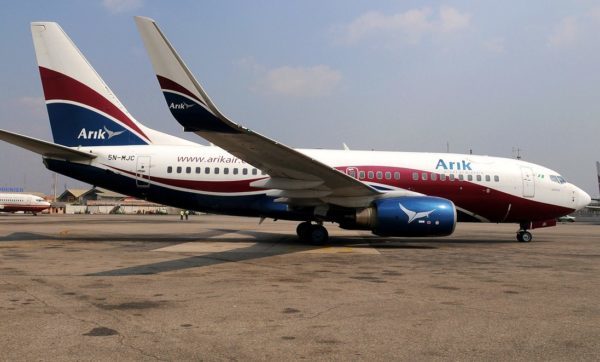 Hundreds of Passengers were left helpless on Mondayat the domestic wing of the Murtala Muhammed Airport (MMA) in Ikeja, Lagos, after aviation unions interrupted Arik Air from operating flights out of the airport.

The NATION reports that members of National Union of Air Transport Employees (NUATE) and the Air Transport Services Senior Staff Association of Nigeria (ATSSSAN) stormed the entrance gate to the airline’s office as early as 6.am.

They prevented the airline’s workers from entering the facility.

NUATE’s Secretary General Ocheme Aba said the union took the action when the airline management did not to accede to their demands.

“First of all, these decisions were taken unilaterally. Based on labour practice, every decision that would affect, in terms of payment of the workers, has to be negotiated. There has to be a collective bargaining agreement. That’s the labour practice. Yet, they didn’t even keep to that promise.”

Also, Arik Air management on Monday apologized to passengers whose travel plans were disrupted by some aggrieved workers.

Arik Air’s spokesman Adebanji Ola said: “We wish to place on record that the picketing was illegal and has no backing of the aviation unions whose leadership has embraced dialogue by attending mediatory meetings called for Tuesday, September 15, 2020 (today) by the NCAA.

“The management strongly condemns this action and once again assures all stakeholders of a safe and conducive working environment. We shall also protect the interest of the flying public for a safe, friendly and on time travelling experience.