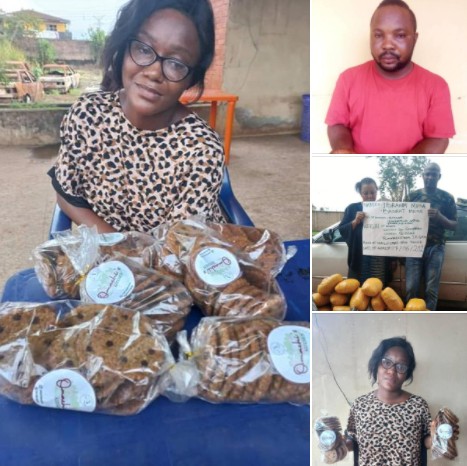 Operatives of the National Drug Law Enforcement Agency have apprehended a medical doctor, Jane Ofoma in Auchi, Edo State, or operating an online catering service, where drugged cookies and biscuits are being made and sold to members of the public.

The agency accused Ofoma, 26, of using her Omachi’s Kitchen to sell drugged cookies and biscuits.

A statement on Tuesday by the Director, Media and Advocacy, NDLEA, Femi Babafemi, said following intelligence and surveillance, narcotic officers of the Edo State Command of the agency, on Saturday, June 19, 2021, stormed her operational base at No. 1 Winners Way, Auchi, where she was arrested.

According to him, no fewer than 94 pieces of cookies produced with cannabis sativa were recovered.

“She has confessed to baking the cookies with skunk in her statement, while under interrogation,” Babafemi said.

In the same vein, operatives from the Kwara State Command of the agency arrested a 52-year-old ex-soldier, Ibrahim Musa, with 12.167 kilograms of Arizona (cannabis sativa), four grams of cocaine and 25 grams of flunitrazepam.

Musa was apprehended on Thursday, June 17, 2021 at Oke-Odo, Tanke area of Ilorin metropolis, when he arrived from Lagos to supply his customers in the state.

Musa, a sergeant, who worked in the maintenance department at the Abati Army Barracks, Lagos, from where he was deployed to the 117 Battalion in Chibok, Borno State, before he deserted the Army, had arrived Ilorin in company with his wife, Basirat, in his Honda Accord car with number plate Lagos JJ 707 BL with the seized exhibits.