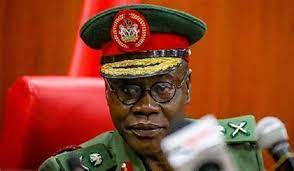 The Senate on Tuesday confirmed the nomination of Maj.-Gen. Faruk Yahaya for the position of Chief of Army Staff (COAS).

The confirmation came after the presentation and consideration of the report of the Joint Senate Committee on Defence and Army at plenary.

Chairman of the Senate Committee on Defence, Aliyu Wamakko, presented the report.

Maj.-Gen. Yahaya was nominated to replace the deceased former COAS, Lt.-Gen. Ibrahim Attahiru, in a military plane crash in Kaduna.

In his presentation, Wamakko said the committee was satisfied with the comprehensive and robust engagement and interactions with the nominee during the screening.

The senator said Yahaya’s nomination was in line with Section 217 (2abc) of the 1999 Constitution, as amended, and in accordance with the provision of sections 18(1) of the Armed Forces Act, Cap A20, Law of the Federation of Nigeria, 2004.

He said the committee did not receive any petition against the nominee and that he was cleared by the Department of State Services (DSS) for the job.

Wamakko added: “He showed a clear knowledge of the Army with apt for a Chief of Army Staff. Despite the Army being the largest of the Armed Forces, the nominee was clear in his vision to encourage joint operational synergy with other services for success in all theatre of operations.”