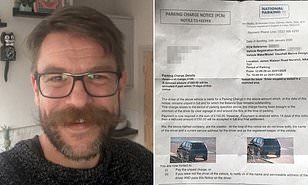 A furious motorist has been served with a £100 parking fine but claims he pulled over for just 26 seconds while having a sneezing fit.

Steven Savage says he stopped as he feared causing an accident if he carried on driving while sneezing in on the road in Norwich.

But his Vauxhall Meriva Design hatchback was filmed by a parking enforcement camera while he was stationary for 26 seconds.

Mr Savage, 37, was stunned when he received a letter in the post 10 days later, saying he was being fined £100 for breaching a strict no-parking rule.

The letter told him that his car had stopped in an unauthorised place between 12.09pm and 29 seconds and 12.09pm and 55 seconds on Monday, January 20.

The payment was demanded by National Parking Enforcement Ltd which manages the private road on the Norwich Research Park next to the Norfolk and Norwich University Hospital.

Mr Savage, an electrician from Attleborough, Norfolk, described the fine as “ridiculous”, saying he had only stopped for “a matter of seconds and in the interest of safety.”

Mr Savage began sneezing while he was on his way to pick up his girlfriend from the Bob Champion Research and Education building on the research park.

The letter told him that the fine would be reduced to £60 if he paid within two weeks, but he has refused to pay up and is appealing against it.

A spokesperson for the Norwich Retail Park said that James Watson Way was owned by Bullen Developments, a subsidiary of building firm R G Carter. National Parking Enforcement Ltd and R G Carter have been contacted for comment.

Britain may remain in lockdown till 2021, govt to urge Brits to cover faces...

See How US teenagers use Face Masks to fool shops into selling them...