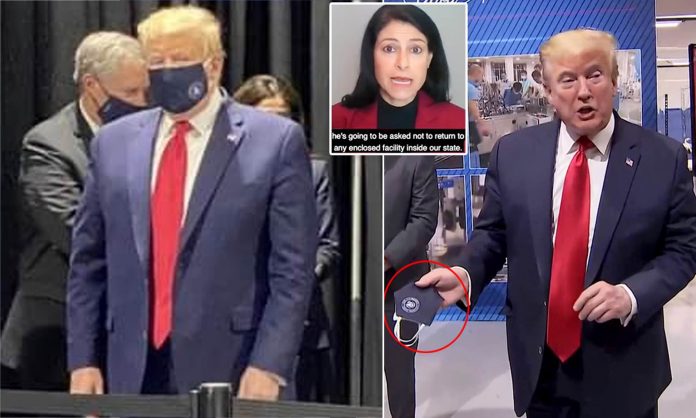 United State President, Donald Trump has been spotted wearing a face mask for the first time during a tour of a Ford Motor after repeatedly refusing to wear the protective mask.

The American president traveled to the crucial U.S. election battleground state of Michigan on Thursday amid tensions with its Democratic governor Gretchen Whitmer during the coronavirus pandemic.

The plant has been recast to produce ventilators and personal protective equipment, with Trump also holding a roundtable discussion with African-American leaders concerning vulnerable populations hit by the virus.

Trump had repeatedly refused to wear a mask during any of his public events at the plant in the city of Ypsilanti even though Ford on Tuesday reiterated its policy that all visitors must wear them.

But he was snapped wearing it eventually – reportedly after being persuaded by Ms Whitmer, according to a tweet by Democratic strategist Christine Pelosi, and daughter of Nancy.

She added: “And sadly it was not for the entire tour … baby steps one supposes. le sigh.”

When asked if Trump was told it was acceptable not to wear a mask in the plant, Ford Executive Chairman Bill Ford said, “It’s up to him.”
“Honestly I think I look better in a mask,” Trump added jokingly.

Meanwhile, Ms Whitmer, seen as a potential vice presidential running mate for presumptive Democratic presidential nominee Joe Biden, is facing a backlash from some critics against her stay-at-home orders in a state hit hard by the last recession.

Human Interest: “Poles have been angels to me”, says stranded Iranian after poles raise...