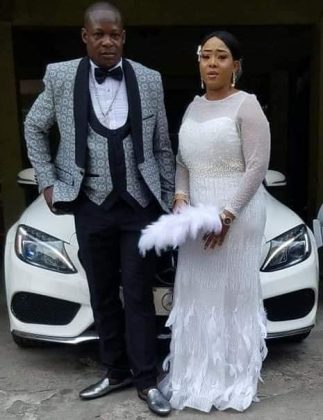 Wife of NURTW boss, Kunle Poly and actress, Olayinka Lawal has denied reports alleging that she married her husband because of his wealth.

Olayinka during an interview with THE NATION gave an insight into her marriage with the transport Union boss, noting that her love for her husband which made her tie the knot was not because of his wealth.

When asked if she married Kunle Poly because of money, she said, “No! you know love has no description, my love can go to someone hawking on the street.

“I love Kunle because he is dark, because he is playful; Kunle is just full package for me. He is a very generous man, he goes out of his way to please people and he sometimes gets betrayed by these people,” she added.

The actress also urged members of the public to not judge her husband based on reports they hear about him, adding that he is not what people portrayed him to be.

She added that since her becoming married to the transport union boss, she has not had any need to be worried for her safety, stressing that she has never seen her husband with a gun or any instrument of violence.

Drive-in Cinema to tour the UK throughout the summer

‘I lost two brothers in one week’, lawmaker laments bad roads in Niger