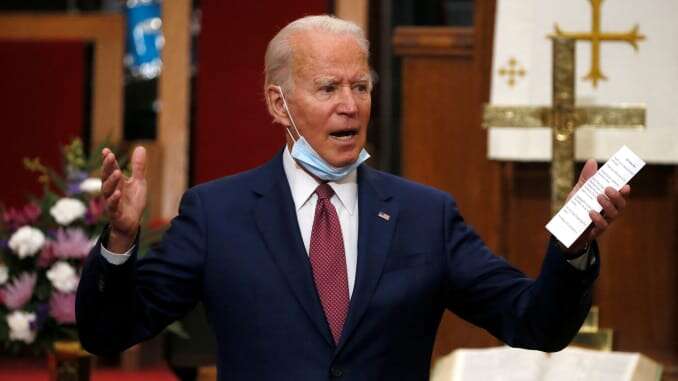 Mr Biden made his statements while he addressed the nation from the Mayor’s Reception Room in Philadelphia City Hall, marking the first time Biden has traveled outside Wilmington, Del., since the coronavirus pandemic prompted stay-at-home orders across the country.

The prospective Democratic nominee criticized President Trump for allowing law enforcement in Washington to tear-gas peaceful protesters in Lafayette Park, in front of the White House. The protesters were cleared so Trump could have his photo taken in front of nearby St. John’s Church with a Bible in hand.

“When peaceful protesters are dispersed by the order of the president from the doorstep of the people’s house, the White House — using tear gas and flash grenades — in order to stage a photo op at a noble church, we can be forgiven for believing that the president is more interested in power than in principle,” Biden said.

“The president held up the Bible,” Biden continued. “I just wish he’d open it once in a while, instead of brandishing it. If he opened it, he could’ve learned something.”

Biden called for the country to acknowledge and take action to eradicate systemic racism. He said, “We can’t leave this moment thinking that we can once again turn away and do nothing.”