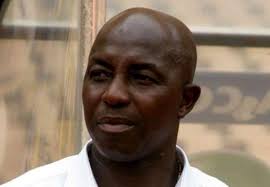 Embattled former Super Eagles coach, Samson Siasia, has expressed gratitude towards those who have shown financial support to him in a predicament which he described as a wilderness which won’t last for long.

Siasia was banned from all football related activities for life following a match-fixing probe by the sport’s governing body, FIFA, last August after the adjudicatory chamber of their independent Ethics Committee found him guilty of having accepted to take bribes in relation to the manipulation of matches in violation of the FIFA Code of Ethics.

The 1994 African Nations Cup winner is set to appeal his ban in a hearing scheduled for March 19, 2020 by the Court of Arbitration for Sports.

He said, “The donations are coming in slowly, but steady. I can see the N1,000 and the N500 donations. I want to thank people for all the widow’s mite, other big donations you know about already, including from Segun Odegbami.

“God bless Nigerians that came out to support me in my time of need. I will forever remember them. I have a list of all of them.’’

Siasia also revealed that he has been seeking divine intervention over his current predicament as he revealed to Sunday PUNCH in a telephone conversation.

His words, “Sometimes I fast and pray but everything is in God’s hands. He has never disappointed me before,” Siasia said.

“I have been praying over it, it’s a matter of time, I will soon be out of this wilderness and back to the Promised Land again.

Buhari orders military to be ruthless with bandits