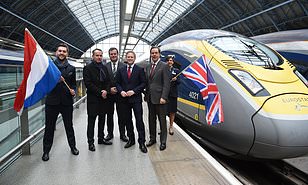 The route was launched in April 2018 with passengers able to travel direct from London to Amsterdam in just under four hours.

Checkout magazine learnt Eurostar will begin running direct trains in both directions on April 30 following progress in negotiations between the UK, France, Belgium and the Netherlands, which will enable border checks to be conducted on departure in the Netherlands.

Direct services to the UK from Rotterdam will launch on May 18.

Eurostar was assured that the UK and Dutch governments would agree to allow border procedures to be carried out in the Netherlands by the end of 2019, but progress has been slower than expected.

The Department for Transport said the UK Government is ‘finalising an agreement’.

On the development, Eurostar chief executive Mike Cooper said: ‘Our services from the UK to the Netherlands have proved very popular, with over half a million travellers since launch.

“Our fully direct service marks an exciting advance for high-speed rail and provides consumers with a comfortable, environmentally friendly alternative to the airlines on one of Europe’s busiest leisure and business routes.”

EFCC, KEEP OFF: The Sun to seek Court Redress Over threat

Meet car mechanic who became a doctor to fill void of shortage of black...

No plot to make my son next Awujale, says Subomi Balogun