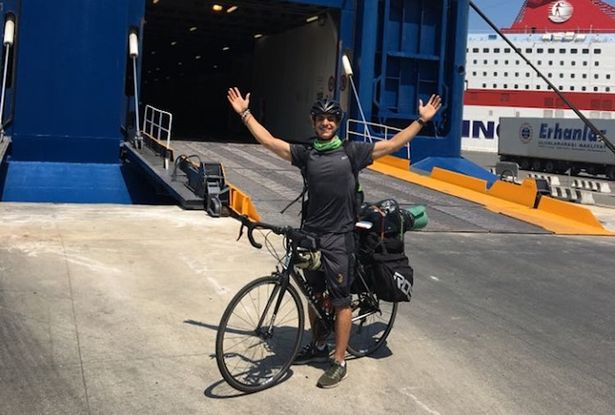 The outbreak of the Coronavirus pandemic put to halt movement as many persons were grounded in locations against their wish.

However, determined to defy the odds against his emigration, a Greek University student spent seven weeks cycling home from Scotland to Greece after his flight was cancelled because of coronavirus outbreak.

Kleon Papadimitriou, a 20-year-old engineering student at the University of Aberdeen, set off on the 2,175-mile journey home to Athens after three of his flights were cancelled.

Recounting his journey to CNN, Mr Papadimitriou set off on May 10, after installing an app for his family to track his journey.

To help his journey, he had with him a tent, sleeping bag, bread and canned sardines, he spent most of his nights in forests of fields.

Nearly 50 days after first setting off, he arrived home on June 27 to a welcome party of family and friends.

“It was very emotional,” he said. “Coming from a family from two parents that were very adventurous in their younger years, seeing me kind of follow in their footsteps, I think is very emotional to them and obviously gives me a lot of meaning.”

Mr Papadimitriou said the adventure has made him “more confident” in his abilities.

He advised anyone willing to embark on such similar adventure, saying: “When you set the bar really high and you attempt to reach a really ambitious goal, whether you achieve it or you don’t, you will have improved,” he said.

49 corpers to repeat service in Ekiti, Kaduna, Ebonyi, others