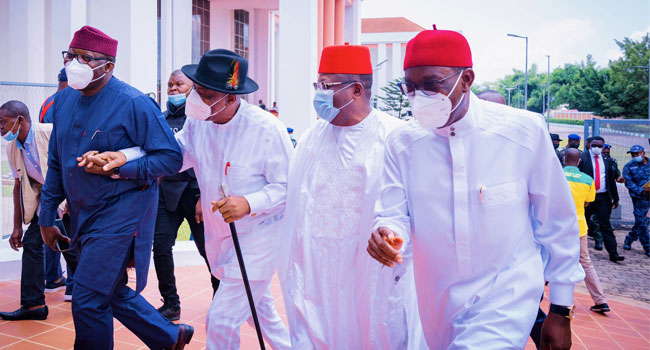 Resolutions reached by the southern governors at their meeting on Tuesday elicited more nationwide reactions on Wednesday.

The governors, had at their meeting in Asaba, the Delta State capital, banned open grazing and called on President Muhammadu Buhari to take bold steps in restructuring the country.

Reacting to these resolutions, northern sociopolitical group, the National Publicity Secretary of the Arewa Consultative Forum, Emmanuel Yaw, on Wednesday, said that some of those advocating restructuring were bent on the disintegration of the country.

Yawe stated, “On restructuring, the ACF believes that before we take a decision on this, we should agree on whether Nigeria should remain one country before deciding on what

“Our position on this is informed by the fact that some of the advocates of restructuring are at the same time advocating the dissolution of Nigeria. Are they believers in Nigeria at all? We must all agree to let Nigeria be, before we move forward.”

Also, the southern caucus in the House of Representatives, in a statement on Wednesday, commended the governors on the demand for true federalism and restructuring.

Justifying the ban on open grazing, they said the Federal Government should provide “alternative and modern livestock management that does not constitute a security and economic challenge to the nation.”

Also, the Southern Senators Forum, in a statement on Wednesday, hailed the resolutions of the governors.

They urged the governors to immediately approach the leadership of the National Assembly for necessary legislative input to give their decisions, the required legal backing.