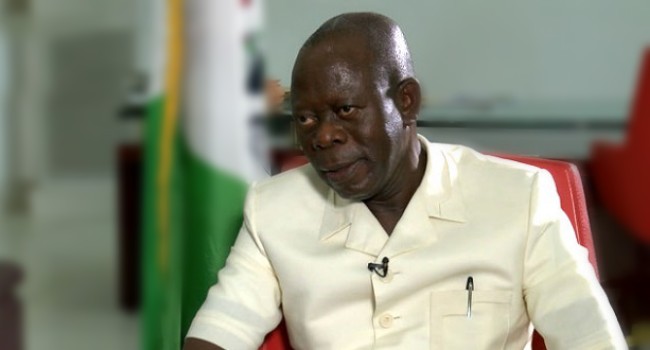 The National Chairman of the All Progress Congress (APC), Adams Oshiomhole, has said he is playing local politics because he does not want to be a leader that cannot win any election in his state.

Oshiomhole spoke on Saturday in Auchi, Edo State when he received some defectors from the Peoples Democratic Party (PDP).

“I can’t leave local politics because I do not want to be a national chairman who can’t win any election in his state.

“Some people asked me why I am playing local politics as a national chairman and I told them that every politics is local. I don’t want to be an Abuja politician who cannot win my unit and ward election.

“If I don’t win my place, how will I deliver the president and how will I be a useful national chairman?

“I will play national politics and I will also play unit, ward, local government and state politics because if you are disconnected with local politics, you are not going anywhere in politics.

“The only permanent position in politics is the grassroot while all other positions are tenured. By the time my tenure elapsed, I am still coming back to the local politics,” he said.

Earlier, Mr Abubakar Momoh, leader of the defectors, had said that he opted to join the APC to work with Oshiomhole and Governor Godwin Obaseki toward a better Edo.

No to witchcraft, not in our land!