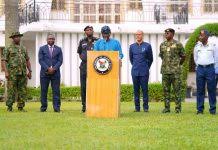 Lagos State Government, on Tuesday announced a partial lockdown of activities in the state as part of measures to break the cycle of transmission of coronavirus.

The directive takes effect from Thursday, March 26, a statement from the Lagos State Government added.

Sanwo-Olu advised the organised private sector to take drastic steps as done by the government in the public sector and allow non-essential workers to work from home.

The governor also asked banks and other financial institutions to prioritise online channels for their services to the public, adding that only essential and key senior staff should be allowed to work in the office during the restriction period.

In a televised briefing after State’s Security Council meeting held at the State House in Marina, Sanwo-Olu said the restriction measures were necessary, given the rise in the number of confirmed COVID-19 cases in Lagos.

The directives, the Governor said, did not affect pharmacy shops and all markets where foodstuffs are traded.

He said, “Eateries and restaurants must not accept eat-in customers; they are to serve food in takeaway packages.

“As much as possible, let us all refrain from inter-state travelling of any kind until the worst of the crisis is behind us,” he said.