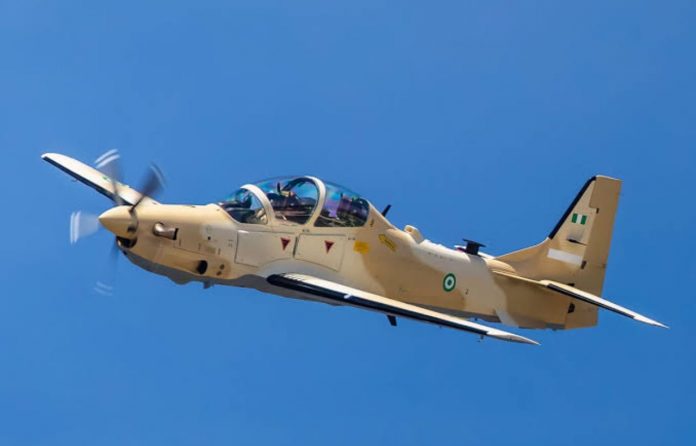 Nigerian Armed Forces have not been able to deploy some of their ammunition against bandits causing havoc in the North-West and parts of the North-Central geopolitical zones because of an agreement signed with the Government of the United States, Checkout Magazine learnt.

According to PUNCH, the Armed Forces informed committees of the National Assembly, that the agreement signed with the Government of the United States was that the A-29 Super Tucano fighter jets procured from the country would be deployed against terrorists and insurgents, and not bandits.

In light of the above, some lawmakers spearheaded moves to designate bandits as terrorists.

The Nigerian Air Force had on July 22, 2021, taken delivery of the first batch of six aircraft from the United States. The second batch of the planes arrived in Nigeria in September.

A total of 64 pilots and maintainers from the Nigerian Air Force were trained to the US standards with the US Air Force’s 81st Fighter Squadron at Moody Air Base in Georgia, United States.

PUNCH quoted a member of the security committees in the National Assembly to have said,
the lawmaker said, “Let me tell you the truth. We once asked the Armed Forces why they had not deployed the Tucano in the fight the bandits and one of the service chiefs (name withheld) told us that their hands are tied due to the human rights regulations regarding to the aircraft. He told us that the equipment is meant for the war against terrorists and insurgents and since these are bandits, they cannot be deployed.

“He actually told us that once the bandits have been designated as terrorists, they would be wiped out. Don’t forget that the bandits today are not different from Boko Haram, looking at their activities and the gravity of attacks by them. Now that both chambers of the National Assembly have called for the declaration, we urge the President to implement our resolutions.”

Kanye West not richest Black man in US ― Forbes

El-Zakzaky’s Passport not with us – Malami, DSS