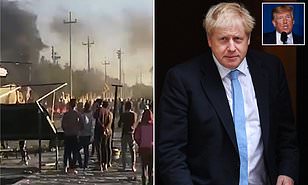 • Calls on Iraqi friends, world leaders to embrace peace and stability
UK Prime Minister, Boris Johnson has finally broken his silence on the strike and the growing crisis in the Middle East following his Caribbean holiday.

The PM had faced criticism over his silence and his refusal to cut short his trip to Mustique.

In a statement released on Sunday evening, Mr Johnson did not condemn Mr Trump’s actions, saying: “Today I have spoken with President Macron, President Trump and Chancellor Merkel, and will be speaking with other leaders in the coming days.

“General Qassem Soleimani posed a threat to all our interests and was responsible for a pattern of disruptive, destabilizing behavior in the region.

“Given the leading role he has played in actions that have led to the deaths of thousands of innocent civilians and western personnel, we will not lament his death.

“It is clear however that all calls for retaliation or reprisals will simply lead to more violence in the region and they are in no-one’s interest. We are in close contact with all sides to encourage de-escalation.

“I will be speaking to other leaders and our Iraqi friends to support peace and stability.”

It emerged that Iraqi President Barham Salih offered his condolences to Iranian President Hassan Rouhani over the killing and urged self restraint.

The phone call came after Iraq’s parliament backed a recommendation by the prime minister that all foreign troops should be ordered out of the country.

Britain has urged Iraq to allow UK soldiers to continue the fight there against the so-called Islamic State terror group following the non-binding vote with some 400 UK troops stationed in Iraq in the fight against IS, while the US has 5,200, prompting fears of a withdrawal that could cripple the battle against the terror group.