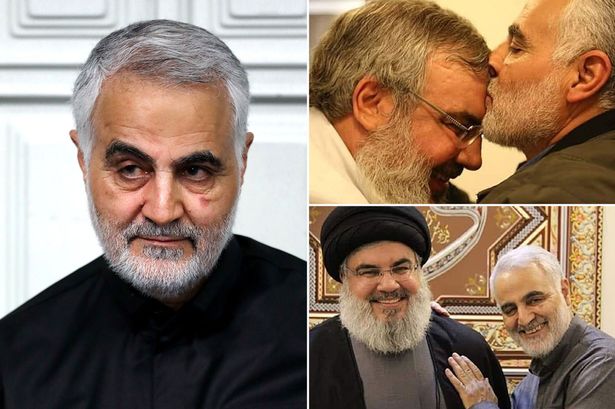 The last known photos of Iranian General Qassem Soleimani show him kissing the forehead of a Hezbollah chief days before he was assassinated by the US.

General Soleimani, head of Iran’s elite Quds Force, was seen smiling as he embraced Hezbollah’s Secretary-General Hassan Nasrallah during a meeting in Beirut.

The military chief is also seen praying in the images – understood to have been taken last week – which were released by Iranian media on Sunday.
Secretary-General Nasrallah has vowed to avenge his friend’s death, saying US forces would “pay the price” for the drone strike that killed General Soleimani near Baghdad’s airport last Friday.

He said in a televised speech: “The American army killed them and it will pay the price. The only just punishment is (to target) American military presence in the region: US military bases, US warships, each and every officer and soldier in the region.”

He said US civilians, including businessmen, engineers, journalists and doctors, should be spared. He added: “When the coffins of American soldiers and officers… start to return to the United States, (US President Donald) Trump and his administration will realize they have lost the region.”

The Hezbollah leader also called on Iraq to free itself of the American “occupation”.

Hezbollah has been deemed a terrorist organisation by the US, UK and the Arab League.

General Soleimani was killed in a strike on his convoy after landing at Baghdad’s airport, sending the Iran-US conflict into unprecedented territory amid a spiraling crisis. Iraqi militia leader Abu Mahdi al-Muhandis was also killed.