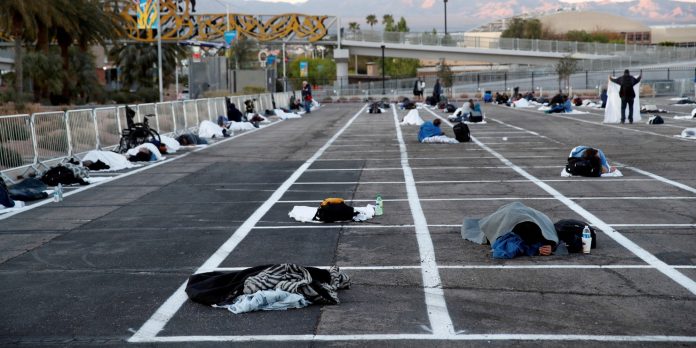 Las Vegas, Nevada has been criticised for providing a temporary homeless shelter in a car park with absolute social distancing barriers.

This came after a homeless man who had been using the Catholic Charities’ homeless shelter, one of the most popular facilities in the city for people experiencing homeless homelessness, tested positive for coronavirus forcing the shelter to close down.

This left about 500 homeless people searching for somewhere to stay as the Courtyard Homeless Resource Centre, was also full to capacity.

The city, rather than house the homeless in the numerous empty hotels and casinos that it now has available, has set them up in the parking lot of Cashman Centre, which is usually used as a convention centre and sports complex.

The shelter is made up of 24,000 square feet of carpet for sleeping mats, constructed by local students, however, the carpet was soon removed forcing the now 117 people to sleep on the concrete floor while reportedly being boxed in by lines painted on the floor which ensure they stay six feet apart.

Initially, 66 people slept at the shelter on the first night but it was soon realised that it would have been hard to keep disinfecting the carpet and keep it clean and safe for those sleeping on it.

“We found that it was very difficult to disinfect and clean. We had asked for sleeping mats, which we use at the Courtyard, and those can be disinfected easily. But there were none to be had.”

Images of the homeless people sleeping on the concrete floor soon emerged on Twitter, with many disgusted at the image they were seeing.