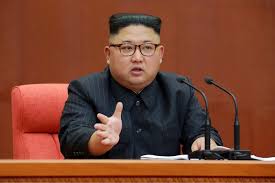 North Korean leader Kim Jong Un warned top party officials of the impending “serious consequences” bound to be befall them if there is an outbreak of the new coronavirus in the country, state media reported Saturday.

The warning comes after the the impoverished nation, with a weak and ill-equipped healthcare system, closed its borders to prevent the spread of the disease into its territory.

Channels TV reported that Kim told a meeting of the ruling Workers’ Party of Korea that the fight against the virus was “crucial state affair for the defence of the people” that required maximum discipline, according to the official Korean Central News Agency (KCNA).

“In case the infectious disease spreading beyond control finds its way into our country, it will entail serious consequences,” KCNA quoted Kim as saying.

“No special cases must be allowed,” he added, and ordered officials to “seal off all the channels and space through which the infectious disease may find its way”.

Pyongyang has not reported a single case of COVID-19, which has killed more than 2,800 people and infected over 84,000 people in dozens of countries since it emerged in neighbouring China.
North Korea has banned tourists, suspended international trains and flights and placed hundreds of foreigners in quarantine to prevent an outbreak. It has also reportedly postponed the new school term.