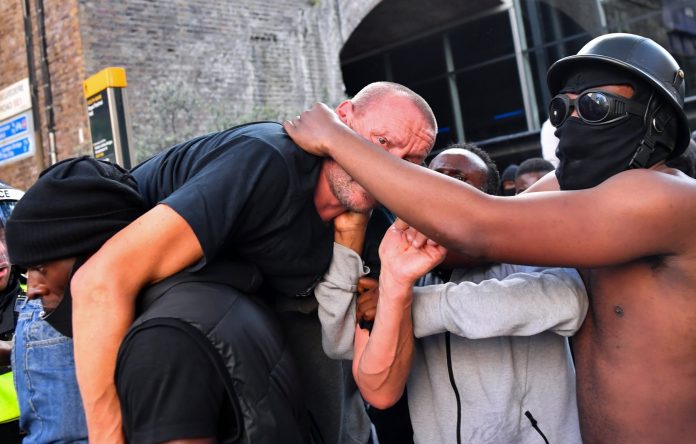 A heartwarming picture of a Black Lives Matter activist carrying an injured counter-protesterr to safety as violence broke out between rival groups in London has emerged online.

Images captured by a Reuters photographer showed a white man clutching his head as a black man carries him over his shoulders, flanked by police in riot gear, near Waterloo station.

The man had been set upon on the steps leading to the Royal Festival Hall in central London and badly beaten, before other protesters stepped in to protect him, according to Reuters journalists at the scene, Independent UK reports.

Riot had earlier erupted between anti-racism demonstrators and far-right protesters who took to the streets of London in response to recent Black Lives Matter rallies sparked by the police killing of George Floyd in Minneapolis last month.

Far-right groups shouted racial slurs at the anti-racism protesters, and some tried to use metal crash barriers to break through police lines.

The Metropolitan Police said it had arrested five people for offences including violent disorder and assault on police and that six officers had suffered minor injuries. Fifteen people were treated by paramedics.