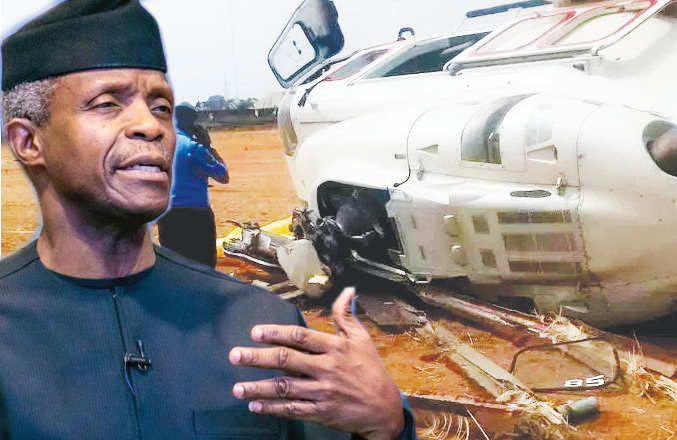 The Accident and Investigation Bureau (AIB) has cited human error as the major reason behind the crashing of the helicopter conveying Vice-President Yemi Osinbajo to Kabba, Kogi State, seventeen months ago.

Details emerging further points to loss of visual contact with the ground and external surroundings, inappropriate landing techniques and limited planning before the commencement of the flight by the crew as other possible reasons.

Recall that Osinbajo was one of the 12 persons aboard the Caverton Helicopters Limited chopper marked 5N-CML when it crashed at the Kabba Stadium February 2, 2019, almost aborting his Family Chats and Next Level engagements.

The Accident and Investigation Bureau (AIB) through its commissioner, Akin Olateru, released details of the crash alongside three others that happened in the country between 2014 and 2019 in Abuja yesterday.

Olateru said: “The flight crew stated that they sighted the intended landing area as a result of the cloud of residual dust generated by the downwash of a Police helicopter.

“After sighting the football field, the flight crew approached with the speed of 20feet to about a 100feet, and entered a hover to land.

“The co-pilot began radio altitude callouts “35, 30, 25, 20 and 15”. At about 14:34h, the helicopter experienced a hard landing on the right main landing gear and rolled over onto its right side. All persons on board were evacuated uninjured.”

Breaking: Iran admits shooting down plane and killing 176 – but says it was...