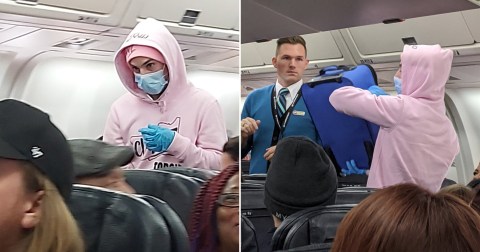 A 28-year-old musician, Potok Philippe, had caused a flight from Toronto to Jamaica to turn back and make an emergency landing after the musician declared he just came back from Hunan province in China and he is not feeling too well.

“Can I get everybody’s attention, please. I just came back from Hunan province, the capital of the coronavirus. I’m not feeling too well. Thank you.”

According to Metro.UK, the airline staff made the musician wear a mask and gloves as they escorted him off the plane.

Potok later claimed it was simply a joke and that he had hoped to go viral on Instagram with the prank.

He was arrested and charged with mischief.

He said he was shocked when nobody laughed and said within 15 minutes cabin crew staff were wearing masks and put him in a mask and gloves as well. Video and pictures filmed by other passengers showed him being escorted from his seat by staff.

Potok added: ‘I’m very, very sorry for my ignorance and not understanding that its an epidemic, that people hear the word and its become synonymous with threats.

“I thought it would spark a reaction. I did not think what I was doing would be considered illegal [or] warrant that type of response.”

FG: Why we allocated 86% of 2021 supplementary budget to security

No time to be kids: The students traveling 100km a day for selective schools

Second term: I have nothing to gain if Obaseki Does Not Run –...

Kalu to agitators: “We need investments, not war”