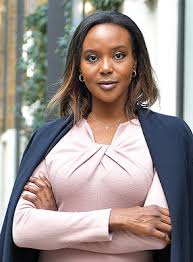 Lawyer and diversity campaigner Funke Abimbola says she suffered “bias” when she tried to get into the profession.

About a third of FTSE 100 companies have no ethnic minority representation on their boards, a report has revealed.

The Parker Review Committee found 31 of the 83 firms which provided relevant information fell into this category.

Ms Abimbola said: “I found a number of barriers to entering the profession because I had an African name and am a black woman, without any doubt.”

She told the BBC, “I had to make over 100 phone calls to get a foot in the door. I have experienced bias and situations where, being a black woman, I was judged more harshly over other colleagues. You are more likely to be noticed and are far more likely to have negative judgements made about you if you are part of an ethnic minority.”

The Parker report also found even lower representation at board level across FTSE 250 companies, where 119 out of 173 (69%) had no ethnic diversity.

The Parker committee, formed to consult on the ethnic diversity of company boards, published its first report into the subject in 2017.

At the time, 51 of the FTSE 100 companies had no ethnic representation on their boards, in comparison with about 33% today. Data was not collected from the FTSE 250 firms.

That report recommended that each FTSE 100 company should have at least one director of colour by 2021.

Why APC will rule beyond 2023 – Abdullahi