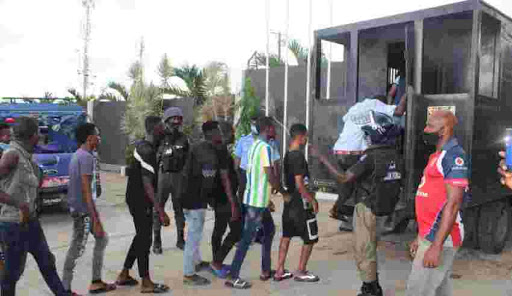 The Police in Lagos State on Wednesday apprehended Sixty five people during a birthday party at a hotel in the state for flouting the government lockdown rules.

They were arrested while dancing and making merry at Park Hotel, 84, Augusto Close, Oko Oba in Lagos, as some of them, including women, were found with hard drugs and other banned substances, Tribune reports.

The state Police Spokesperson, Bala Elkana, confirmed the arrest in a statement signed by him on Wednesday.

“The suspects were arrested for holding a birthday party and consuming some substances suspected to be hard/illicit drugs. Some of the suspects were found in the swimming pool catching fun in total disobedience to the social distancing regulations and the lockdown order.

“The manager of the hotel was equally arrested and the hotel sealed off by the relevant agency of the state government.

“Investigation is ongoing and the suspects will be charged to court.”