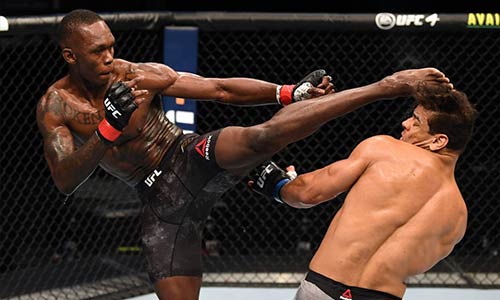 There was less action in the first round as both MMA fighters traded few kicks and punches with Costa pressing the champion but throwing few shots.

Adesanya came out with more purpose in the second round, outboxing his opponent and landing deadly shots.

Adesanya delivered a perfect performance on Fight Island to retain his UFC middleweight title for the second time.

Adesanya became the new UFC middleweight champion when he finished Robert Whittaker at UFC 243 last October by TKO. Before that, he picked up a decision win over Kelvin Gastelum in the co-headliner of the UFC 236 pay-per-view event. Heading into this fight, he fought six times in less than a year-and-a-half total in the UFC and won all six bouts.

Costa was coming off a big win over Yoel Romero at the UFC 241 pay-per-view event. He previously beat Uriah Hall on the preliminary portion of the UFC 226 pay-per-view event in Las Vegas, Nevada. He entered this fight on a 12-fight winning streak.

Some lecturers not qualified to be in varsities –ASUU