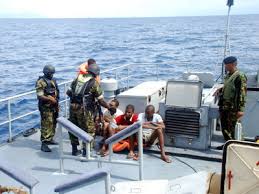 The Director-General of the Nigerian Maritime Administration and Safety Agency (NIMASA), Dr. Bashir Jamoh says the country is making progress in its war against piracy and other crimes on the nation’s waterways.

He made his remark in reference to the conviction of three persons in connection with vessel hijack on the Gulf of Guinea.The conviction is the first since the signing into law of the Suppression of Piracy and Other Maritime Crimes (SPOMO) Act in June last year by President Muhammadu Buhari.

Jamoh said NIMASA as an interested party will continue to work closely with other agencies of government, the international community, and other stakeholders to achieve improved security in the Gulf of Guinea.

He stated: “This will serve as a deterrent to other criminal elements who are still engaged in the nefarious activities on our waterways. On our part as an agency, we will not relent on our efforts to ensure a safe and secure maritime domain in line with our mandate.

“The Suppression of Piracy and Other Maritime Crimes (SPOMO) Act 2019 has come to stay and it is victory for Nigeria as a whole as we are determined more than ever before to take our rightful place in the comity of maritime nations.”

The Nigerian Navy had arrested nine persons, namely, Binaebi Johnson, Daniel Lemmar, Ghane Gordon, Hassan Hakeem, Gregory Smith, Ofem Uket, John Mark, Chidi Amadi and Eze Amadi, who were suspected to be members of the kidnapping syndicate. They were said to have demanded a $2 million ransom out of which $200,000 was eventually paid.

US to establish West African Trade Hub in Nigeria

UK Prime Minister to move in with partner.

Kanye West’s Yeezy worth at least $3 billion as he looks to branch out...