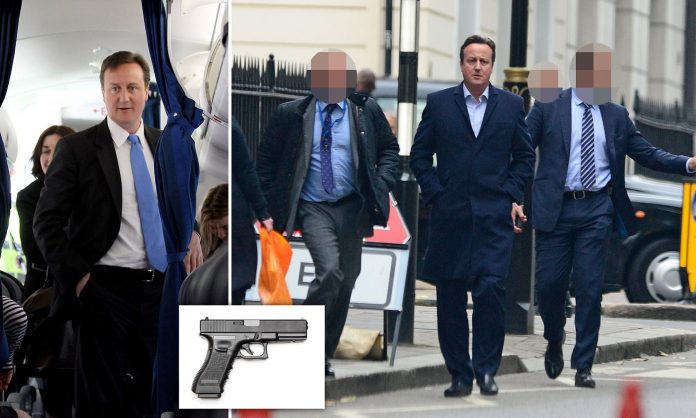 A man served as former British Prime Minister, David Cameron’s bodyguard is being investigated after he allegedly left in a toilet on a transatlantic jet.

Daily Mail reports that “terrified passenger” found the gun and gave it to staff on a British Airways flight from New York to London on Monday.

The Met said the officer involved has been removed from operational duties.

The gun, believed to be a 9mm Glock 17 pistol, is said to have been left by a close-protection officer from the Met’s Specialist Protection unit, who took off his holster while in the toilet.

Mr Cameron’s passport – and that of the officer – were found with the weapon, according to the Sun.

A Metropolitan Police spokesperson said: “We are aware of the incident on a flight into the UK on 3 February and the officer involved has since been removed from operational duties.

“We are taking this matter extremely seriously and an internal investigation is taking place.”

British Airways said it had adhered to Civil Aviation Authority rules allowing UK police “to carry firearms on board in specific, controlled circumstances”.

Mr Cameron was the UK prime minister for six years until July 2016, when he stepped down following the result of the EU referendum.