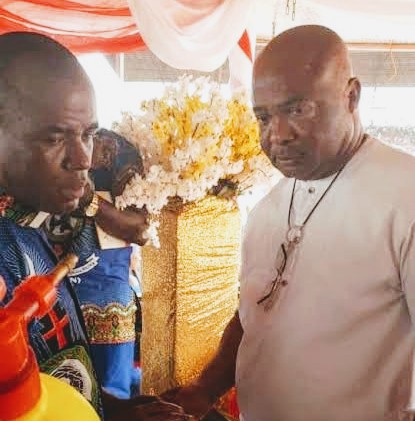 In the aftermath of an unusual victory for Senator Hope Uzodinma at the Imo State guber poll following Supreme court’s verdict, the man who foresaw the occurrence, Catholic church priest, Revd. Fr. Ejike Mbaka, was at the Governor’s office to perform spiritual cleansing as he assumed office on Wednesday.

According to PUNCH, the catholic priest was at the Government House for over three hours on Wednesday when the governor was sworn-in.

It was gathered that Mbaka, who came in company with another priest, his aides, and church members, also prayed for the staff at the Government House including the security operatives attached there.

A source in the government house told PUNCH, “Fr. Mbaka was here (Government House) on Wednesday. He was the one who dedicated the governor’s office. He was here for over three hours. He came with another priest, Fr Otimbodombo, and his church workers.

“He was in one of the cars for a long time before he came down and dedicated the governor’s office. We later besieged him and he started blessing us and blessed our sacramentals and chaplets.

“Fr Mbaka personally prayed for me and I was happy. He blessed my chaplet which I will be using for prayers. They left after staying for, at least, three hours. ”

Checkout Magazine gathered that that the priest, left for Enugu, his base, after the spiritual exercise at the government house.