A waterfall in Minnesota has almost frozen over, and the images are magical.

Minnehaha Falls, in southern Minneapolis, US, are the main attraction in the city’s Minnehaha Park, and are one of the most photographed sites in the state.

The falls typically freeze over in winter when temperatures drop below zero with the temperatures in the Midwest city currently hovering around -3C.

Images show the falls blanketed in snow and ice, although the water is still flowing to the river below.

Earlier this month, Lake Ontario in Canada froze over to spell-binding effect. One of the five Great Lakes of North America, it has formed ice plates along the shoreline after a cold snap saw temperatures plunge to -7C.

The spectacle was caught on camera by veteran TV anchor and photographer John Kucko, who used a drone to video the lake in all its icy glory.

He shared pictures and footage of the transformation on Twitter, writing: “Welcome to Narnia: The ‘ice plates’ have returned along the shoreline of Lake Ontario today with bitter wind chill in WNY (Webster, NY).”

At the end of January 2019, Niagara Falls, Lake Michigan and the Chicago River all got the winter wonderland treatment, with many visitors sharing dramatic pictures online. 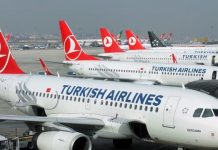 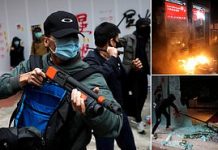 Brexit: 5 things to change after January 31

A Man Arrested For Exchange PVC For Relief Materials in Osun...