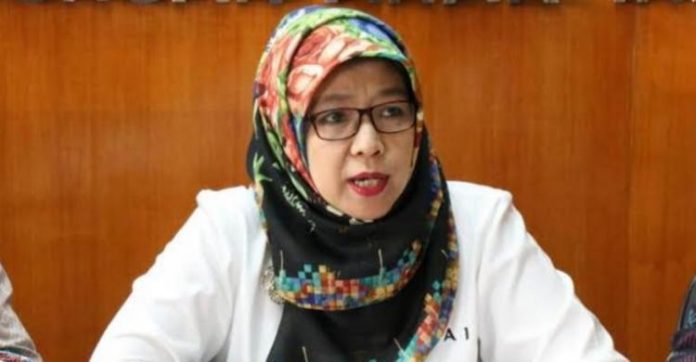 Indonesian commissioner for health of Indonesia’s Child Protection Commission (KPAI), Sitti Hikmawatty boss has claimed women can get pregnant from swimming in the same pool as men with “strong sperm”.

The child protection boss made her statement during an interview with Tribun news, saying that women should be wary of the risk of unwanted pregnancies.

Hikmawatty claims has sparked widespread criticisms over the weekend following her interview.

She said: “There is an especially strong type of male sperm that may cause […] pregnancy in a swimming pool,”
“Even without penetration, men may become sexually excited [by women in the pool] and ejaculate, therefore causing a pregnancy.”

She went on to say that his type of pregnancy was more likely to happen if the women in question had reached an age of being sexually active.

The SUN UK reports that Hikmawattys claims were immediately shut down by the public, including medics and doctors.

Indonesian Doctors Association (IDI) executive Nazar told Antara news agency on Sunday that it was “impossible” for women to get pregnant in a swimming pool.

“The water in swimming pools […] contains chlorine and other chemicals. Sperm cannot survive in these conditions.”

Many have mocked Ms Hikmawatty over the dangers of women getting pregnant during the recent floods that have submerged the city during the rainy season.

Ms Hikmawatty first tried to defend what she said, saying it was based on a study, but later admitted that the study does not exist.

She now faces an ethics committee over the issue and has since apologized for her “incorrect statement” which she retracted on Sunday following the backlash.