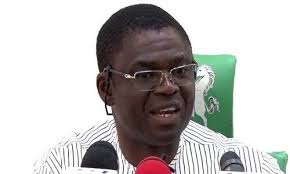 The Edo State Deputy Governor, Philip Shaibu, has revealed details of how he endangered his life and that of members of his family while he was trying to save the National Chairman of the All Progressives Congress, Adams Oshiomhole, from being removed from office as the state governor.

Shaibu said he was almost killed alongside his family members in the process.

The deputy governor stated this while speaking with journalists in Benin City after he was decorated as the Midwest Tempo Magazine Man of the Year for his contributions to the growth of democracy in Nigeria and the development of the state.

He charged the people of the state to support Governor Godwin Obaseki’s efforts aimed at redefining governance to improve the lives of residents.

Narrating his ordeal, he said,, “I was brutalised for Oshiomhole. I was prepared to lay down my life for him.

“I threw my family members over the fence for safety when I was attacked for his sake.

“My hands were stitched after I was attacked on the floor of the state House of Assembly, trying to save Adams Oshiomhole from being removed in his first and second terms in office.

“It is now time for the people of Edo State to choose if we want progress. Our progress must not be put in reverse. Some persons want to stop Edo State from progressing but this is the time to defend Governor Obaseki and the Edo people.”

Shaibu described himself as “a true comrade” and noted that he deserved the title of comradeship, having protested and fought the military alongside notable Nigerians like the late Chief Gani Fawehinmi, to restore democracy in Nigeria.