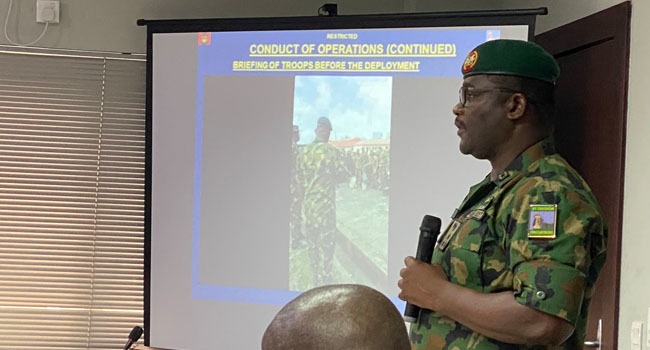 The Justice Doris Okuwobi Judicial Panel of Enquiry and Restitution on the alleged atrocities of the now disbanded Special Anti Robbery Squad (SARS) was on Saturday informed that President Muhammadu Buhari in his capacity as Commander-in-Chief actually authorised the deployment of soldiers to maintain law and order in Lagos following escalation of violence during the End SARS protests in the month of October.

The revelation was made during the cross-examination of the representative of the Nigerian, Brigadier General Ahmed Ibrahim Taiwo of the 81 Division, Intelligence Brigade by Counsel to the Lagos State Government, Abiodun Owonikoko (SAN).

Asked about the chain of command in the military and if Governor Babajide Sanwo-Olu has the recoginsable authority to deploy troops to help maintain law and order, Brigadier Taiwo said, the Governor could only have made a request but only the President and Commander-in-Chief can authorize the deployment of soldiers.

The disclosure brings to rest weeks of accusations by the End SARS protesters that Governor Babajide Sanwo-Olu it was who ordered soldiers to disperse protesters from the Lekki Toll Plaza.