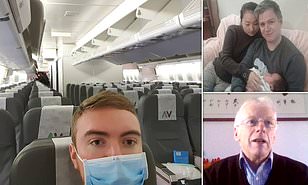 A British father, his Chinese wife and their newborn baby are stuck at the epicentre of the coronavirus outbreak after losing a race to catch an evacuation flight home.

UK citizens living in the city of Wuhan complain they were not given enough time to make it onto the plane, which took off at 9.45am local time on Friday. Britons have complained of Government arranged pick-ups arriving too late and travel documents being handed at the very last minute.

It is understood the FCO sent consular cars and issued special travel permits to get people past road blocks in the city, which authorities have put on lockdown.

But Adam Bridgeman told the BBC’s Today programme the car had arrived too late to her him, his wife and one-month-old son to the airport on time. His Chinese partner even tried calling police to see if they could help them make the evacuation flight.

Adam said the FCO had told him his family might be able to leave the city on another flight. He added: “The Foreign Office said that they might be able to organise for us to board a different plane from, in their words, one of Britain’s EU partners.”

Adam and his wife Su are yet to get their baby Austin vaccinated after deciding it was far too risky to take him to Wuhan’s hospitals, which are packed with thousands of infected patients.

Some families have turned down a seat on the repatriation flight after being told relatives with Chinese passports would not be able to join them, after the People’s Republic forbade them from leaving the country. That decision was reversed hours before the plane was due to depart, leaving very little time for families to get to the airport.

The coronavirus outbreak has now killed 213 people in China, infecting 9,692 people so far and spreading to at least 18 countries.

It is understood that the Foreign Office is in ‘urgent discussions’ with EU countries about a second rescue flight back from Wuhan.