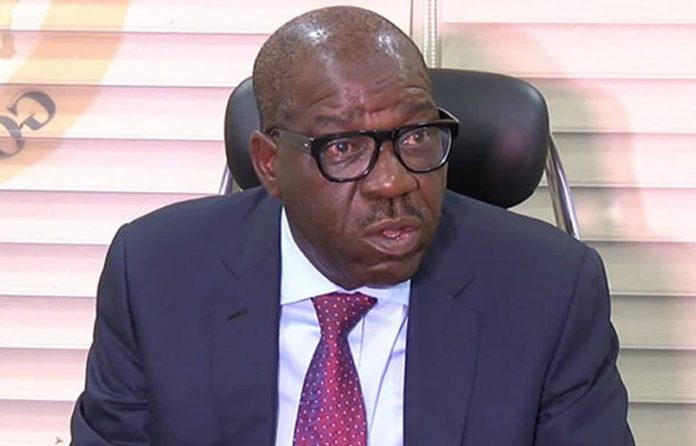 The Edo State Governor, Godwin Obaseki, has reacted to the report that Osagie Ize-Iyamu has been adopted as a ‘consensus’ candidate by a faction of the All Progressives Congress (APC) in Edo.

Seven governorship aspirants in the Edo State APC were reported to have met Tuesday and adopted Mr Ize-Iyamu as their consensus candidate before he proceeded to pick his nomination forms on Wednesday at the APC national secretariat, Abuja.

Mr Ize-Iyamu and others who stepped down for him belong to a faction of the APC in Edo State that is loyal to the APC National Chairman, Adams Oshiomhole, who is engaged in a fierce political fight with Mr Obaseki.

According to a statement signed by the governor’s spokesperson, Crusoe Osagie, “The Edo State chapter of the APC, which is responsible for deploying the inner workings of the party towards the emergence of a candidate of the APC in the forthcoming gubernatorial election, resides and operates in Edo State, not Abuja,”

“It is, therefore, hilarious to hear that a so-called consensus candidate for the party in Edo State governorship election was selected in Abuja. For us, this is a joke taken too far and clearly shows that Comrade Adams Oshiomhole once again has set the APC on a journey to perdition in Edo State as he did in Zamfara, Bayelsa, Rivers, Taraba and several other states.”

The governor added, “The last time we checked, the timetable released by Oshiomhole’s National Working Committee (NWC) fixed Edo Primary election for 22nd of June, 2020 and it is expected to hold in Edo State.

“But we now hear that they have conducted the primary election three weeks before the set date in a jurisdiction far away from Edo State, making a mockery of our great party, the APC, President Muhammadu Buhari, the presidency and all other institutions and esteemed individuals associated with our party.

“Our conclusion on this matter is that like all other illegal actions taken by Oshiomhole, this too is a nullity and shall come to no-effect.”

Contrary to Mr Obaseki’s assertion here, the faction of APC loyal to Mr Oshiomhole did not say they have held the party primary; what they said was that seven other aspirants have stepped down for Mr Ize-Iyamu and have adopted him as their “consensus” candidate for the party primary.

A former deputy governor of the state, Pius Odubu, is said to be among the aspirants that stepped down for Mr Ize-Ayamu. The other aspirants are Ebegue Amadasun, Charles Airhiavbere, Chris Ogiemwonyi, Ehiozuwa Agbonayinma, Saturday Uwuilekhue, and Solomon Edebiri.