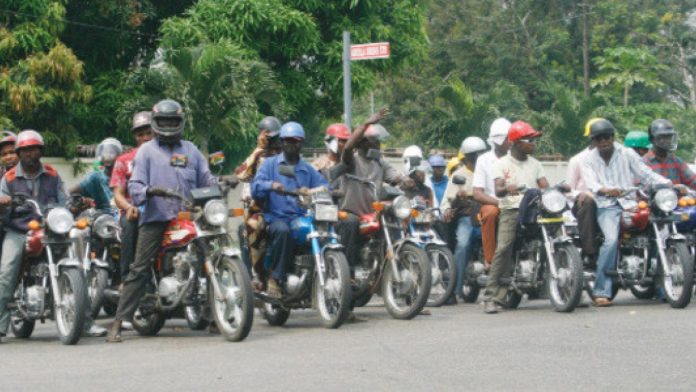 Abuja motorists and commuters have backed the decision to ban motorcycles from the city centre and the major highways of the Federal Capital Territory.

This is as the FCT Police Command said it had started the enforcement of the ban that restricts commercial motorcycle operations to satellite towns in the territory.

The Commissioner of Police, Bala Ciroma, while briefing journalists on Wednesday, said the commercial motorcyclists were causing avoidable accidents and disobeying traffic rules.

“They are also notorious for mobbing and attacking motorists. The command will not tolerate such act of lawlessness,” he said.

Ciroma spoke while parading three okada riders, who allegedly alongside others now at large, almost lynched a motorist at an accident scene in Gwagwalada.

The three were among the 34 suspects paraded at the state command on Wednesday for offences such as murder, armed robbery, cultism and arson.

Ciroma said the suspects would be arraigned in court upon conclusion of the investigation. Some residents, who spoke with our correspondent, commended the police and FCTA for the okada ban.

A resident of Kubwa, Mohammed Abdullahi, said, “The motorcyclists are becoming a nuisance in that they are operating against established laws of the city. They have also been fingered in many crimes in the FCT and always gang up to beat up people, especially ladies, at the slightest provocation. The FCTA should ensure strict enforcement of the ban.”

A surveyor, Mel Nnachebem, also supported the ban, saying, “It is a welcome development because the spate of accidents is becoming worrisome due to the recklessness of the okada riders.”