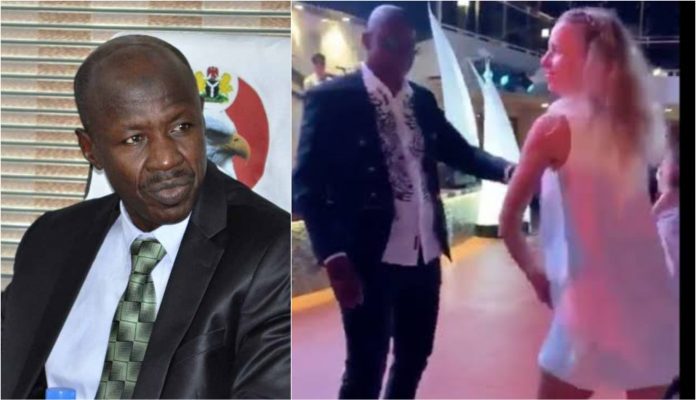 The Economic and Financial Crimes Commission (EFCC) would not be taking action on a video of Ayodele Fayose, dancing on a cruise ship while on a “medical trip” abroad.

The special assistant on media and publicity to Mr Magu, Tony Amokeodo, on Thursday told the PREMIUM TIMES in an interview that the commission is only prosecuting the former governor, not persecuting him.

He noted that since Mr Fayose’s trial is still on, the EFCC can only wait till he returns on the next adjourned date for the continuation of his trail.

His words,”We are not going to react to that video (on) the grounds that the EFCC is prosecuting him, not persecuting him.

”Besides, the court granted him permission to travel abroad for medical attention. We are of the opinion that the former governor would have to be in court and that his trial is on course. And we will definitely meet him on the next adjourned date.”

Mr Fayose, a former governor of Ekiti State, is currently being prosecuted for a N2.2 billion fraud by the EFCC.

He was seen in a recent viral video dancing Salsa outside Nigeria. The video was said to have been shot on the Caribbean Islands.

Earlier, photos of him having a swell time on a beach had circulated on social media as Nigerians accused him of deceiving the court to travel abroad for fun rather than medical treatment.

Responding, Mr Fayose took to his Twitter handle @GovAyoFayose to tell those commenting on his photos and video to mind their business.

He admitted that the video and photos were recent and said that celebrating the New Year is part of his fundamental human rights.

He said he travelled for medical check-up and was not on admission at the hospital.