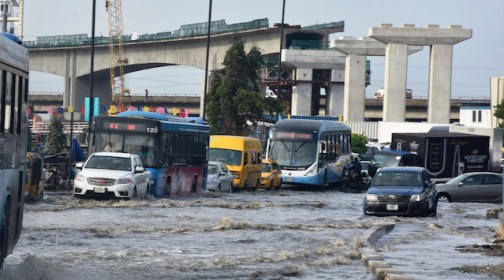 Residents of Lagos State have bemoaned flooding in the state, following a 12-hour downpour which resulted to difficulty in mobility within the state.

Thursday’s rainfall which started at dawn was the fourth day of rainfall in Lagos, which has started recording casualties with the death of two in Ogudu, where a storey-building collapsed on Wednesday.

The Nation reports many motorists took to social media, especially Facebook, to post their frustration on the road as traffic was at a standstill for hours.

A commercial bus driver, Isiaka Rauf, said he pushed his vehicle through the floodwaters yesterday after it broke down.

The Lagos State Government had in February warned of high potential of rainfall this year, warning residents living in low lands to be wary of high level of water.

The Commissioner for the Environment and Drainages, Mr. Tunji Bello had warned residents, and further stated that the government would be embarking on cleaning all the state’s major channels and canals to reduce the devastating effect of the flood on residents.

Meanwhile, fears have continued to grow amongst experts, who noted that the advent of the rain and its attendant flood might further worsen the situation forcing many resident to come down with the infection.

Shocking! Rail travel from Manchester to London can cost more than flights to New...

“If Tinubu cannot be supported by the North, there’s no hope for Nigeria”, Dele...