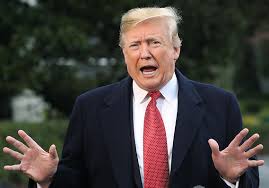 Donald Trump has launched a fuming response to his impeachment from behind the Resolute Desk in the Oval Office, just hours after the Senate swore in its presiding officer and jurors to consider the charges against him.

“I got impeached for absolutely no reason,” Mr Trump complained during a rant that included at least nine denials that he knows Lev Parnas, the man who has now claimed that the highest echelons of the White House were well aware of the effort to use American military aid money to force Ukraine to launch an investigation into one of the president’s domestic rivals.

The president’s appearance came after a busy morning in US politics, with the Senate voting earlier in the day to approve the United States-Mexico-Canada (USMCA) trade deal before turning their attention to impeachment proceedings.

During his comments, Mr Trump said his impeachment trial “should go very quickly”, and insisted repeatedly that the phone call he had with Ukrainian president Volodymyr Zelensky in July was “perfect”.

Of the USMCA, Mr Trump suggested it may have been the greatest deal in American history, even though it is largely a tweaking of the Nafta deal that was signed and negotiated nearly 30 years ago.

Beyond the immediate scope of the Senate and impeachment, other troubles appeared to be brewing for Mr Trump on Thursday, with a report from the Government Accountability Office accusing the president’s team of breaking the law in their Ukraine dealings, and the FBI visiting the home and office of Robert Hyde, the Trump donor who allegedly stalked former Ukraine ambassador Marie Yovanovitch as a part of an apparent conspiracy to have her ousted from her position.

It’s all a “big hoax”, Mr Trump said on Thursday after signing a directive on prayer in school, referring to allegations by Mr Parnas that the president was personally aware of efforts in Ukraine to dig up dirt on Joe Biden. Mr Parnas, an associate of the president’s personal lawyer, Rudy Giuliani (whom Mr Trump called a “great crime fighter” during his remarks), said on national television Wednesday night: “President Trump knew exactly what was going on.”

Mr Trump’s Senate impeachment trial is due to begin in earnest next week, although it is unclear how long the proceedings might last.

While the president has called for a speedy trial, developments like Mr Parnas’s claims could make it more difficult for Republicans to proceed quickly. A handful of Republicans in the Senate have said they would be open to hearing further testimony from witnesses who were not called before the House, and could ban together with Democrats to force those witnesses to present themselves.