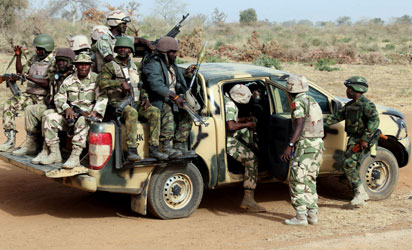 According to News Agency of Nigeria, Air Task Force (ATF) of Operation Lafiya Dole also launched airstrikes on terrorists’ locations at Bula Bello and Ngoske on the fringes of the Sambisa Forest in Borno.

It was learnt that troops conducted precision airstrikes on bandits’ hideouts at Munhaye and Keta in Tsafe LGAs of Zamfara.

He noted that troops deployed at Tunga also arrested two suspects who were linked to the kidnap of a local teacher in Foga LGA.

He added that one locally made rifle was found in their possession, adding that the suspects had been handed over to the police in Awe for investigation.

“The Defence Headquarters commend the troops for their offensive actions against the bandits and other criminal elements in their area of operation,” he said.

Church leaders Back Ize-Iyamu for Governor