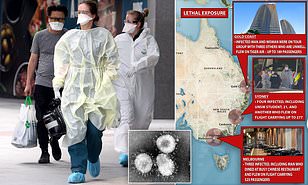 • Outbreak is now declared to be a global emergency

Thousands of people could have been exposed to the coronavirus in Australia by the country’s nine confirmed patients alone – as up to 49,000 people land on flights from China per week and a global health emergency is declared.

Four people in Sydney, three in Melbourne, and two on the Gold Coast have been struck down with the deadly virus in recent weeks. Each one flew in from Wuhan, the Chinese city where the outbreak began, on planes packed with hundreds of potential victims.

At least a day passed after they arrived before they developed flu-like symptoms and eventually went to hospital.

During this time when they didn’t know they were sick, they interacted with hundreds of people each, some of whom could now be infected.

One patient was even allowed out of isolation to celebrate Australia Day at a restaurant with his family while he was waiting for test results.

People they infected will be going about their lives on crowded trains and buses, having business meetings, and sharing meals – potentially passing the virus on.

This is just from the nine confirmed cases – more than a dozen other people are being tested after developing symptoms associated with the virus.