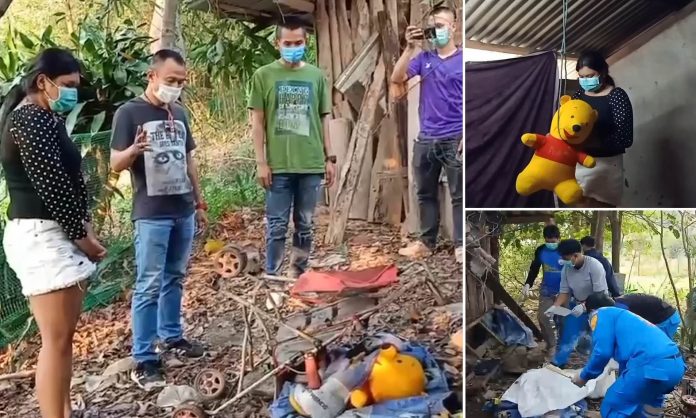 A 14-year-old girl allegedly hanged her one-year-old son because she wanted to stay out with her friends.

The teenager, Arisa Udsanee, had left the youngster with her parents who were angry when she returned home late in Bueng Kan, northeast Thailand last Sunday afternoon.

She reportedly took the infant, Thanapat Udsanee, to the home of a neighbour, Charinthip Nuengsit, 21, and asked for a place to stay. She then let them stay in a cabin in her back yard.

Later that night a motorcycle came to the cabin to pick up Arisa and she told Chrinthip that the boy was leaving with her.

However, on Wednesday morning Charinthip checked the cabin and found a dead baby hidden under a pram. She was arrested after returning to the scene of the crime.

Officers later arrested the boy’s mother and made her carry out a crime reconstruction, using a Winnie The Pooh bear to show how she allegedly hung the boy and then concealed the body.

Arisa allegedly admitted killing her son as she was angry at her own parents for scolding her for staying out late. She said she resented the infant for preventing her from spending time with her own friends.

I was forced to marry a man who raped me at 9, American woman...