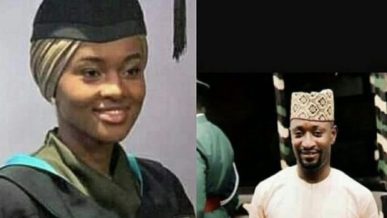 The daughter of President Muhammadu Buhari, Hanan, has dismissed the human rights abuse allegations levelled against her by Anthony Okolie, a man detained by the State Security Service for 10 weeks over the use of a sim card previously used by her.

Mr Okolie, through his lawyer, Tope Akinyode, sued Hanan, the State Security Service (SSS) and MTN, over his ‘illegal detention’.

Mr Okolie is seeking an order to “compel the respondents to jointly or severally to pay the applicant the sum of N500 million as general and aggravated damages for the gross and unlawful violation of the applicant’s right to acquire moveable properties, freedom of movement and self dignity.”

Speaking at the hearing of the suit filed by Mr Okolie at Federal High Court in Asaba on Wednesday, the president’s daughter, through her lawyer M.E. Sheriff, told the court Hanan would not be responding to the allegations “because there was no need.”

Instead, Mr Buhari’s daughter filed a written address in opposition to the originating motion on notice.

The judge, Nnamdi Dimgba, furiously responded saying: “What do you mean you haven’t seen a reason? Sheriff, how can you not see a reason? Somebody has accused you. Even if it is to say, ‘I didn’t do so’, can’t you respond? You’re saying you did not see a reason. Sheriff, what kind of thing is this?”
On his part, the SSS lawyer, E.E. Daobri, said “he did not receive the necessary documents from the SSS headquarters in Abuja on time, hence, could not file a counter-affidavit.” He asked for a two-week adjournment.

Reacting to this, the applicant’s lawyer, Mr Akinyode, asked the court to ensure that the matter was given expedited action. He also alleged that the SSS “are trailing him and his client since the matter started.”

Justice Dimgba responded that, “If this is true, Daobri, tell your men to stop it. They need their liberty to be able to come to court.” He adjourned the matter till March 3, 2020.

Thomas Markle ‘prepared to testify against daughter Meghan in legal battle over publication of...