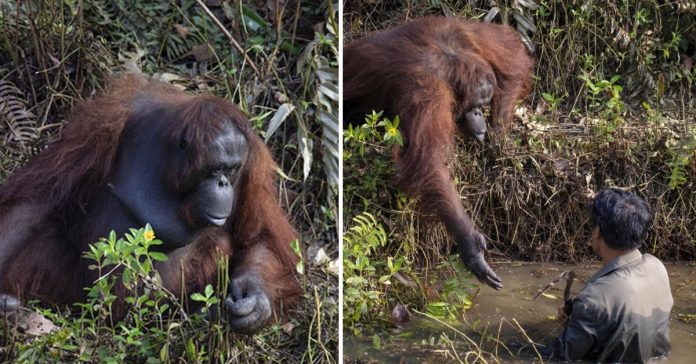 A striking image of an Orangutan offering to assist a man he presumed was trapped in a snake filed river has emerged.

The picture taken in a conservation forest area in Borneo where the endangered species are protected from hunters showed where the ape offered to help a man who is stood in a river filled with the ape’s sworn enemies, snakes.

Anil Prabhakar was out trekking with his friends while on safari when he spotted the man – who works as part of the protective project – in the river.

He later found out he was clearing away snakes to guard the orangutans – until he was interrupted by an inquisitive ape.

Anil, from Indonesia, said: “Someone told him there was a snake in the river. The warden went there and cleared the bushes.

“An orangutan came to the banks and was watching what he was doing. He then came closer and gave his hand.

“The warden just moved away. I asked him why later and he said: ‘It’s a wild animal, not one we are familiar with.

“But they are to protect them.”

The worker is part of the Borneo Orangutan Survival Foundation, a non-profit organisation founded in 1991.