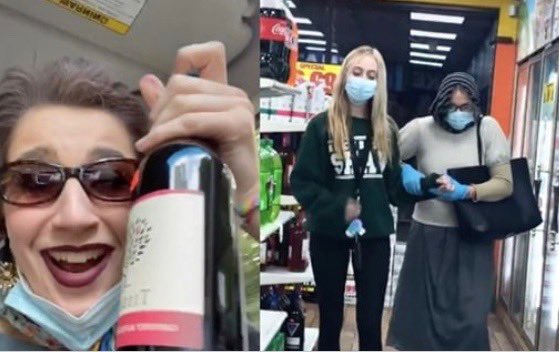 Teenagers in the United States are reportedly taking advantage of the mandatory use of face masks in public places to engage in underage purchase of alcohol, clips emerging from Tiktok confirmed.

Checkout Magazine learnt through some TikTok clips that teenagers allegedly appear to disguise as elderly persons using face masks and use fake IDs to purchase alcohol.

As some on the app have pointed out, teenagers can now exploit unaware shopkeepers by simply covering their faces as best as possible and using someone else’s identification to try and buy alcohol.

While some teenagers have also been spotted wearing sporting wigs, glasses and headscarves in the hope that it will fool the unsuspecting clerk.

Some of these videos have already amassed more than two million views on TikTok and from the few that have gone viral, their efforts to purchase alcohol appear to have been successful, proving that shopkeepers aren’t asking the teenagers to show their faces that are being covered by the masks.

Prior to this trend, Twitter users had suggested that teenagers now have the perfect excuse to buy alcohol with the fake IDs.

Jeff Bezos set to come out of pandemic richer