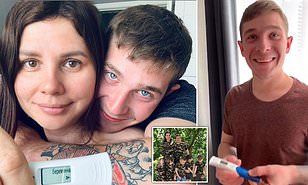 A Russian woman, Marina Balmasheva, 35, has announced being pregnant with her stepson’s baby after recently divorcing his father.

GUARDIAN had earlier reported her announcement of their upcoming marriage.

She announced she is engaged to her 20-year-old boyfriend Vladimir, having split from his father Alexey, 45, whom she was married to for 10 years.

In an Instagram video, shared alongside some pictures, she said, “I’m tired of hiding. Everything is possible in this world. We are four weeks and yes. That is why we decided to get married.”

Marina, who hails from the western Russian region of Krasnodar Krai, reportedly adopted her ex’s five children while they were together.

Last month she sparked outrage after sharing a photo of herself with Vladimir 13 years ago when he was aged seven.

Marina added she is very much in love with Vladimir, and the couple is helping to raise three of his siblings.