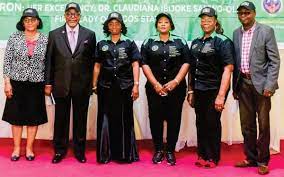 The First Lady made the call at the official unveiling of volunteers for the Mental Health Awareness, De-stigmatisation and Enlightenment (MHADE) in Lagos, an initiative of Orunsii Wellcare Foundation in conjunction with Office of the First Lady.

According to her, there is need for the strengthening of the health system across all levels as this has huge implications for the socio-economic growth and development of any society.

Echoing similar sentiments, Dr. Rasheed Kolade, Director of the Lagos Civil Service Staff Clinic who represented the Commissioner for Health, Professor Akin Abayomi and the Permanent Secretary Ministry of Health, Dr. Olusegun Ogboye, said that a scary report by the World Health Oganisation revealed that psychiatric disease will be the second most common ailment in the world by 2030, hence the need for collaboration between the government, the organised private sector as well as faith-based organisations to help accelerate growth in the health sector.

In her address, the Special Adviser Office of Sustainable Development Goals (SDG), Mrs. Solape Hammond emphasised that the State government commitment to a “Greater Lagos” encapsulated in T-H-E-M-E-S its six pillars of development has already paved the way for the Foundation’s overarching objectives.